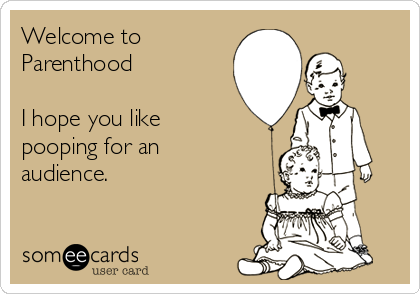 Okay, it’s been nine weeks since Ayanna broke out of my womb, and every time I look at her precious plump face I think: Lawd Jesus WHY DO YOU KEEP ENTRUSTING ME WITH OTHER PEOPLE’S LIVES? Now this is getting dangerous and I thought I made it clear that I DON’T KNOW WHAT THE HELL I’M DOING. Okay, I guess that’s not entirely true anymore, but I still have SO MANY unanswered questions about my mothering style. Such as:

How the hell are we all still ALIVE?

Is it normal that all my son EVER wants to eat is CHEESE?

Is my 1-year-old going to grow up to become a unrepentant MURDERER because we watched Scarface during playtime the other day?

I’m sure I’ll get my answers in due time.

My homey Erin just found out that she’s pregnant with her first child, so now she’s bursting with these existential parenting questions, and coming to me with these questions, as if my parenting game was super tight or something. And my first instinct was to just feed her comforting lies like “Every moment of having children  never sucks and is JUST WONDERFUL. I am VERY well rested, bro. Yup, I would totally be FULL ON pregnant all over again, because THAT didn’t suck for a second.” Then my second thought was to answer her questions by badly quoting Louis C.K. and tell her “I love my kids more than anything in the world, and I regret every decision that led to them being born.” Which is a funny way of saying “I love my kids, but life was way less terrifying and exhausting before they existed and I’d like to go back to a simpler time when the stakes weren’t so high.” But that’s WAY too bleak and not entirely true, and I didn’t want to scare her. I think it’s clear that I’m probably the last parent anyone should rely on for sage parenting advice. I’ve never been officially diagnosed with an anxiety disorder, but I think it’s safe to say that I TOTALLY have one, and it is the crux of all my problems. The only nugget of wisdom I could honestly give was instructing her to take a penetrating stare in the mirror and ask herself if she is a punk bitch, because effective and successful parenting is NOT for punk bitches.

That’s the most reliable takeaway I’ve had since becoming a parent.

And you know what? I don’t think this priceless piece of advice is ever going to steer me wrong for the rest of our lives. I should needlepoint my genius quote and hang it on the mantle (I don’t have a mantle), so I can refer to it whenever I’m feeling overwhelmed.

I explained to her that I can’t remember the last time I was able to use the bathroom without my son ALL UP IN MY FACE. If I ever make the mistake of trying to sit on the throne with the door shut (the way nature intended), he will stand on the other side of the door and bang on it with all of the relentlessness of a severely insane person.

I told her that trying to feed Brandon vegetables is like that scene in Dances With Wolves when Kevin Costner is trying to get the wolf to eat from his hand. But instead of majestic wooden flutes providing the soundtrack, it’s me grumbling “Just eat it eat it eat it just EAT THE FUCKING KALE.” So if you don’t want to get put on a bad parent watchlist because your pediatrician alerted social services that your kid’s iron is low because he chooses to subsist on slices of cheese, you better figure out a way to sneak some damn vegetables in his diet RIGHT QUICK.

I told her that living with a toddler is like that time in college when you were paired with a criminally insane person as your dorm mate, someone whose mood turns on a dime and will pickle your belongings with boogers and vomit if you don’t keep a VIGILANT eye on them.

NOW there’s an infant in the mix, so you can FORGET about sleep, yo. JUST FORGET IT, sleeping is now in your past along with napping, quiet contemplation, and good old-fashioned zoning out. The baby and I are shellacked to each other because I carry her only source of food in my boobs. So it makes disciplining a toddler that much more hilarious for anyone who might be watching us. I have to hastily put the baby down and chase my son around with a tit hanging out of my collar because he keeps trying to open the stove while she’s nursing.

I told her I read somewhere that mother-nature makes your children’s faces really cute by design, so instead of the homicidal urge you feel towards the person who keeps waking you up all night long, your mind performs mental gymnastics to such a level, you’ve tricked yourself into thinking THEY’RE the victim. But I think I totally made that up.

And lastly, I instructed her to start downloading all of her favorite comfort movies to her husband’s xbox NOW, so she can play them ad nauseam when her emotional chips are down. I have watched my favorite scene in Aliens when Vazquez blows herself up more times than I can remember. It always gets me pumped and ready to face the day.